Legal services in 34 countries on 5 continents!

Our Legal Office provides an expansive spectrum of services in sports law and international law – in particular with respect to dispute resolution and overseas debt recovery, as well as contract negotiations of a transboundary character.

Legal counsel and founder of our Legal Office. Managing Partner.
Arbitrator in the Court of Arbitration for Sport in Lausanne. Vice-President of the Board of the Wisła Kraków S.A. football club. Member of the Supervisory Board of REMAK Elektromontaż S.A. and Miastologia S.A. Member of the Editorial Board of LawInSport.
Member of the District Chamber of Legal Counsels in Krakow.
Maciej gained his professional experience in the field of business management acting as Vice-President of the Board and subsequently Chairman of the Supervisory Board of the Lechia Gdańsk S.A. football club. Having been a member and Secretary of the Supervisory Board of REMAK Elektromontaż S.A. and Ekstraklasa S.A. he has a deep understanding of business and the legal problems that entrepreneurs are confronted with.
Due to his work as an arbitrator in the Court of Arbitration for Sport in Lausanne, as well as his previous involvement in bodies of the Polish Football Association, the Polish Hockey Association and in the legal committee of the Polish Olympic Committee, he has gained extensive experience in resolving sports disputes and is well versed in alternative forms of dispute resolution.
Pursuant to his belief that knowledge should be shared to the widest extent possible, he has conducted lectures at the IFBI - International Football Business Institute in Brussels. He has also featured as a guest lecturer at the Academies of Physical Education in Krakow and Gdansk and at numerous conferences.
In his daily legal practice, Maciej provides legal services to business entities, including the provision of comprehensive legal assistance to sports-related entities. Moreover, he specializes in transboundary proceedings and in representing clients before state and arbitral courts in Poland and abroad.
Maciej is an enthusiast of sport and of sports law. As the captain of the Polish Football Representation of Legal Counsels, he constantly encourages his younger colleagues – legal counsels, to occasionally swap their gowns for sports gear or to join the Triathlon Team of the District Chamber of Legal Counsels in Krakow.
He speaks fluent English and German, as well as Russian on communicative level.
return to main page 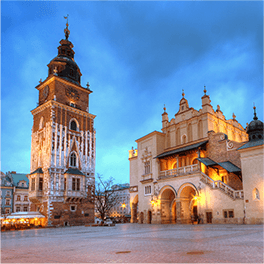 Our Office is open between 9am and 5pm, but you can find us at work significantly later or considerably earlier too.